I saw a recipe called Extreme chocolate cake on allrecipes.com and wanted to try it ever since so I did today and halved the recipe! It was good but ONLY for a true chocolate fan like my sister. A small slice was too much for me and I don't think I can have chocolate for a while!
Here's a picture of me icing the first layer 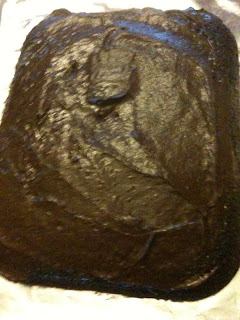 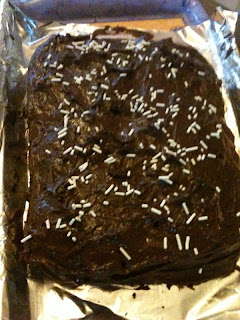 My so called small piece :) 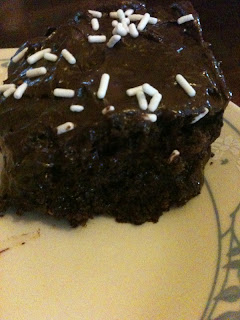 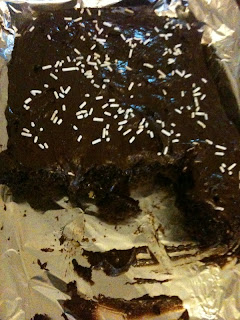 It's an easy recipe(I only make easy recipes) but it really is chocolate overdose so don't make a whole cake and eat it by yourself!!
Posted by Clover at 5:18 AM 4 comments:

Today I decided to make something I've always wanted to try- Meatloaf! I have never had meatloaf in my life and I don't know why! I searched for a few recipes online and finally found a base recipe in this! I used only half a pound of meat and I cooked the meat first and saved the broth for a gravy. I also used a bit of garlic powder, black pepper powder, salt, a hint of thyme, a tsp of barbecue sauce and a couple of chilli crackers in addition to the recipe on the link. I cooked it for about 30 minutes on 175 deg C. 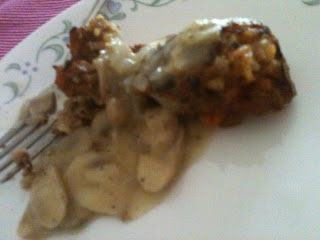 I know the photo doesn't look very appetizing cause I used a small loaf tin and it only filled half the tin and I used the camera from my phone but it tasted pretty good! I made a mushroom gravy using the broth from the meat thickened with cornflour. It was good! A very simple and easy meal to make. Took me about 45 minutes in total (including baking time).  Could add some veggies to make a well rounded meal! 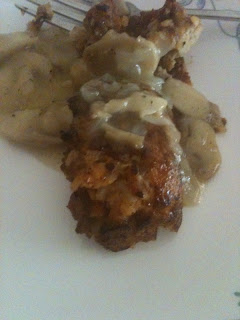 Today I decided I wanted to make dinner and I made a baked fish with some rosemary potato wedges. The fish was really flavorful and nice. 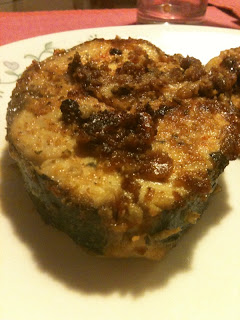 I marinated it with lime, a bit of mayonnaise(like half a teaspoon per fish), chilli powder, parsley, pepper and salt. Then I coated it with breadcrumbs and drizzled a mixture of olive oil and butter and baked it. 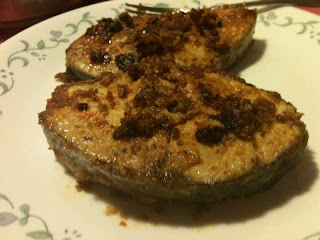 The rosemary potatoes are really simple and I used olive oil, dried rosemary, a hint of garlic powder and salt and pepper. 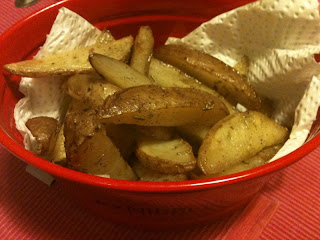 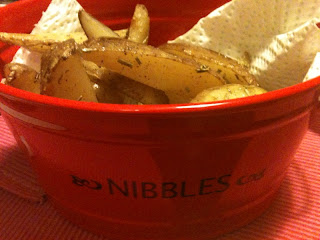 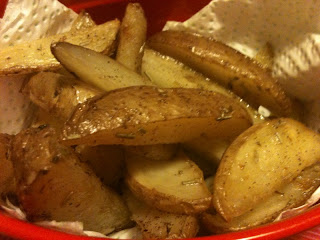 I also made some paneer tikka in the evening for which I used ready to use paneer and marinated it with thick yoghurt, a dash of tomato ketchup, chilli power, garam masala and salt and baked it with a bit of olive oil. 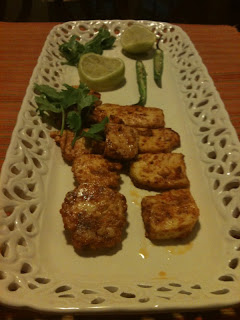 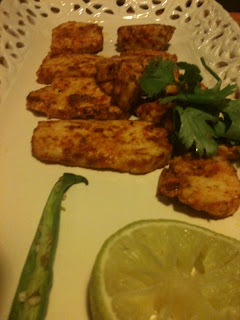 Hope you all enjoyed these low quality amateur cooking photos!
Posted by Clover at 8:04 AM 1 comment: 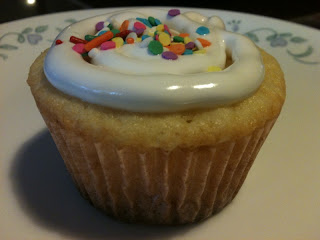 Yesterday my mother told me that the Church asked me to bake some cakes for their fund raising sale. And they wanted the regular good old yellow butter cake. I have a usual recipe that I normally make but today I decided to try this one and i tweaked it a bit, changing the 8 egg yolks to 2 full eggs and 4 yolks and I topped it off with a fluffy white frosting. This was the first time I was making a meringue type icing and while I would like liked it to have set more (have harder peaks) it was good and my sister liked it! This was a very random post but I was bored :D 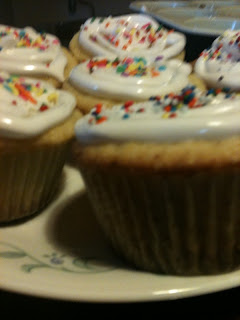 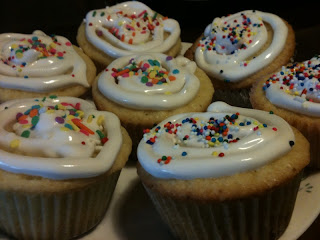 As many of you might know I went to Delhi last month. One of the highlights of my trip was meeting a "friend" I met on Facebook! Some people called it my blind date. Let me tell you the story of my blind date that wasn't nerve- racking, uncomfortable or disastrous.
It all began in 2008 when I was planning to go to Glasgow to do my Masters in HRM. I joined the University of Glasgow 2008-2009 group on Facebook and in one of the discussions met another girl from India who was planning to come to study. We soon took our chats out of facebook and into gtalk and found out we had lots in common and she was a lot like my sister. She lived in Delhi (not common), single, Tamil, Christian, odd quirks, love for food, had a sister etc.  I was super excited she was going to Glasgow as well and told my own sister that i'm going to have another sister in Glasgow. This girl, promised to make me cinnamon pork and go on long walks with me. We also vowed to be each others wing women! I was really excited! But things don't always go according to plan so she didn't come to Glasgow finally but we still kept it touch and I even met one of her weird Scottish friends in Glasgow!
So December 2010, I was talking to a long lost cousin of mine who lives in Delhi at Madras about my visit to Delhi and how I have a friend there who I'm going to meet and turns out they know each other too, small world. And then people asked me how I know said girl.. a very mumbled reply came from me...facebook... I was teased for being a stalker, a creep etc. Anyway, in February I go to Delhi and get ready for my blind date with a girl who I've known for more than 2 years but never met and it went just fine. It didn't even feel like we were meeting for the first time. And surprisingly she ended up coming to Nagercoil a week after I got back. What are the odds? So here's to Rina, a friend met in quite an unconventional way and proof that Facebook can help you make real friends :) 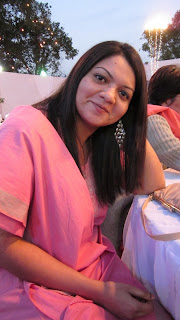 My one and only, always and forever

I live with my parents in the house I grew up. Recently they built a new room for me upstairs so I had to move all my old things. I hadn't opened some of the drawers and boxes in years. And opening them, I felt I was 15 again. They were FULL of boyband magazines, smash hits, TV hits, TOTP, etc. And the majority was of course, Boyzone and Stephen Gately. I found print outs I made with pictures of Stephen Gately and Michael Jackson with the words "My favorite people in the world". I found old "questionnaires" I filled up and My favorite boy was Stephen Gately, my dream lover was Stephen Gately, my favorite singer was Stephen Gately, my current crush was Stephen gately with the words "my one and only, always and forever" in brackets, my aim in life was to meet Stephen Gately etc. Now Stephen Gately is dead. I wonder what that girl who I once was would do if she knew. Yesterday while clearing out, I felt like her and I was so upset, I had to keep reminding myself i'm not 15 or 16 anymore but I dreamt about him last night, something that hasn't happened in years. I did feel like I was 16 and still in school and still madly in love with a pop star. But I'm not.
Tomorrow is St.Patrick's day and the 35th birthday of Steve if he was alive. I have had birthday parties for Steve when I was younger, I have given chocolates to friends in school for his birthday, I was what people would called mental!  So, for the girl I once was, I wish my one and only, always and forever a happy birthday. 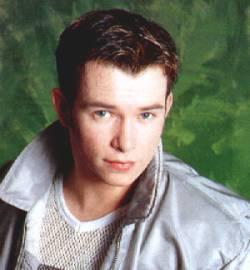 Posted by Clover at 4:53 AM No comments: